The desire for, and act of burying, a pet’s remains – whether in a family cemetery plot or other sacred space – is not a recent trend. People have been doing this for millennia throughout history and throughout the world. Whenever such practices were not culturally sanctioned, it’s likely that there were still  those who would have opted for a sacred burial at the passing of a beloved animal companion.

This section will present some of the more salient aspects of pet burial. To submit an article, please contact us.

There is great evidence from throughout history of humans and (other) animals being buried in the same or adjoining burial plots and vaults.

While many recall the 1960s as a period of a new back-to-the-land movement, another history was brewing – the introduction of plastic caskets at pet cemeteries. Manufacturer, Hoegh Pet Casket Co., states on their website (2010):

Hoegh Industries is a pioneer of pet caskets, and has been producing a quality product since 1966. Hoegh pet caskets are vacuum formed out of high-impact styrene plastic… In 2002, over 35,000 caskets and burial shells were sold.

Eulogy of the Dog 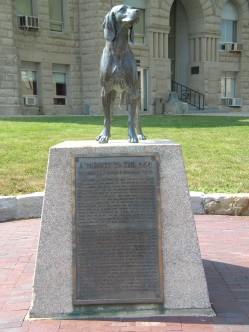 “George Graham Vest served in the United States Senate for twenty-four years, from 1879 to 1903, but the act for which he is best remembered is a speech delivered in an insignificant court case while he was still a lawyer in rural Missouri…The lawsuit that brought him immortality concerned the shooting of ‘Old Drum,’ the best hunting dog of a local farmer. A neighbor who suspected that Old Drum was moonlighting by killing his sheep gave orders to shoot the dog if it appeared on the property again. When Old Drum was found dead near the neighbor’s house, the farmer filed suit, seeking damages of fifty dollars…Vest’s summation to the jury (pdf) at that trial has become familiar to dog lovers across the country through succeeding generations” (Senate History: Classic Senate Speeches).

Intersection of Racism and Animal Exploitation in Horseracing 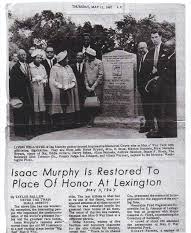 Isaac Burns Murphy (1861-1896) was the first black jockey inducted into the National Museum of Racing Hall of Fame. While thoroughbred horse owners at the time were wealthy white folk, it was not unusual for the caretakers and riders to be black; 15 of the 17 jockeys at the first Kentucky Derby in 1875 were black. But as horseracing grew in popularity, there was a concerted effort to make it a (predominantly) white trade.

It would be interesting to learn more about the treatment of horses at the time. From the Fayette County Sheriff’s Office, KY, we learn that Murphy “was an intuitive rider who encouraged speed through soft words, not through the whip; and occasionally used his spurs to urge the horse on. Instead of riding the horse as hard as possible, he would develop a race strategy, pacing the horse through the field before moving into a favorable position to burst in front at the finish line.”

Like many other jockeys who tried to maintain their weight, he reportedly purged his meals after eating, a practice that takes a tremendous physical and psychological toll on jockeys’ health. He died at the young age of 34 and buried in a segregated cemetery. His remains were reburied two more times; his final resting place at the gravesite of the famous racehorse, Man o’ War (age 30), at the entrance to Kentucky Horse Park.

Timeline of Pet Death (in development)

Prehistory – University of Alberta anthropologist Robert Lose studies dog burials and their clues to understanding human-dog relationships throughout time. He states that:

Globally you can see that there are more dog burials in prehistory than any other animals, including cats or horses. Dogs seem to have a very special place in human communities in the past. As soon as we see skeletal remains that look like the modern dog—say 14,000 years ago—we see dogs being buried.

January 20, 2016 – South Korea – The Ministry of Agriculture, Food and Rural Affairs asserts that “pets treated at animal cremation facilities will no longer be classified as waste under the revised law. Animals not treated at cremation facilities will still be subject to the waste management law, which requires pet owners to dispose of the bodies as waste.” Read article.

Green Pet-Burial Society (GPBS) is hosted by Family Spirals®, a sponsored project of Fractured Atlas, a non-­profit arts service organization. Contributions for the charitable purposes of GPBS and Family Spirals® must be made payable to “Fractured Atlas” only and are tax-­deductible to the extent permitted by law.