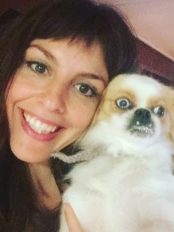 Sienna Córdoba is a scholar of human-ocean relationships. Her research is focused on turtles and how their migratory patterns have affected human history. Most recently, Sienna was awarded a Mellon Foundation Sawyer Seminar graduate fellowship on the topic of “Sea Change” regarding European colonization of the Caribbean and its waterways. She also received an Interdisciplinary Humanities Council Visual Arts award for her project “Secret Texts” which utilized special hydrophobic surface science to print messages only visible when slightly wet.

Sienna’s educational background includes a B.A. in History and Dramatic Literature from New York University and a M.A. in Environmental History from the University of California, Santa Barbara. At UCSB, she was the recipient of a history of science teaching fellowship two years in a row and assisted teaching multiple undergraduate courses on Latin American History, World History, and Early Modern European History. She has also attended archaeological field school at the St. Eustatius Center for Archaeological Research. She is scuba certified and plans to further her training in underwater archaeology in the very near future.

I support the mission of the Green Pet-Burial Society to advocate for consecrating our relationships to animals and the complex web of creation through burial practice. The idea of sharing my gravesite with my two Japanese Chins, Kiki and Iggy, brings a sense of peace.